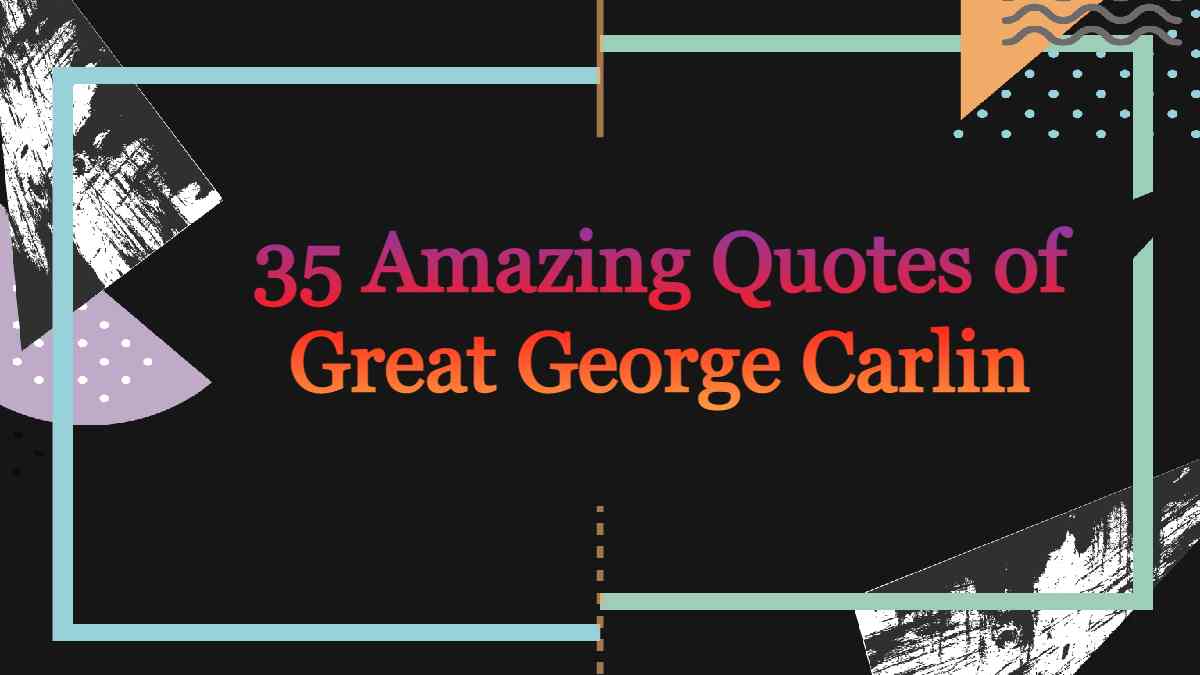 He was known for his dark comedy and reflections on politics, the English language, psychology, and religion.

“Laugh often, long and loud. Laugh until you gasp for breath.”

“The reason I talk to myself is because I’m the only one whose answers I accept.”

“A house is just a place to keep your stuff while you go out and get more stuff.”

“I think people should be allowed to do what they want. We haven’t tried that for a while. Maybe this time it’ll work.”

“People are wonderful one at a time. Each one of them has an entire hologram of the universe somewhere within them.”

“My advice: just keep movin’ straight ahead. Every now and then you find yourself in a different place.”

“There’s a humorous side to every situation. The challenge is to find it.”

“Every day I beat my own previous record for the number of consecutive days I’ve stayed alive.”

“The only person who is with us our entire life is ourselves.”

“Conservatives say if you don’t give the rich more money, they will lose their incentive to invest. As for the poor, they tell us they’ve lost all incentive because we’ve given them too much money.”

“That’s why they call it the American Dream, because you have to be asleep to believe it.”

“In America, anyone can become president. That’s the problem.”

“By and large, language is a tool for concealing the truth.”

“The caterpillar does all the work, but the butterfly gets all the publicity.”

“We have multiplied our possessions but reduced our values. We talk too much, love too seldom, and hate too often. We’ve learned how to make a living but not a life. We’ve added years to life, not life to years.”

“There’s no present. There’s only the immediate future and the recent past.”

“Careful, if you think too much, they’ll take you away.”

“When you step on the brakes, your life is in your foot’s hands.”

“If it’s true that our species is alone in the universe, then I’d have to say the universe aimed rather low and settled for very little.”

“Religion is like a pair of shoes…Find one that fits for you, but don’t make me wear your shoes.”

“Never underestimate the power of stupid people in large groups.”

“If you can’t beat them, arrange to have them beaten.”

“Think of how stupid the average person is, and then realize that half of them are stupider than that.”

“Some people see the glass half full, others see it half empty. I see a glass that’s twice as big as it needs to be.”

“The main reason Santa is so jolly is that he knows where all the bad girls live.”

“Honesty may be the best policy, but it’s important to remember that apparently, by elimination, dishonesty is the second-best policy.”

“Life is not measured by the number of breath we take, but by the moments that take our breath away.”

“Just cause you got the monkey off your back doesn’t mean the circus has left town.”

We request you all to write your thoughts in comments to us.
Also tell us which is your favorite George Carlin quotes.

Finally, thank you very much for visiting our site.