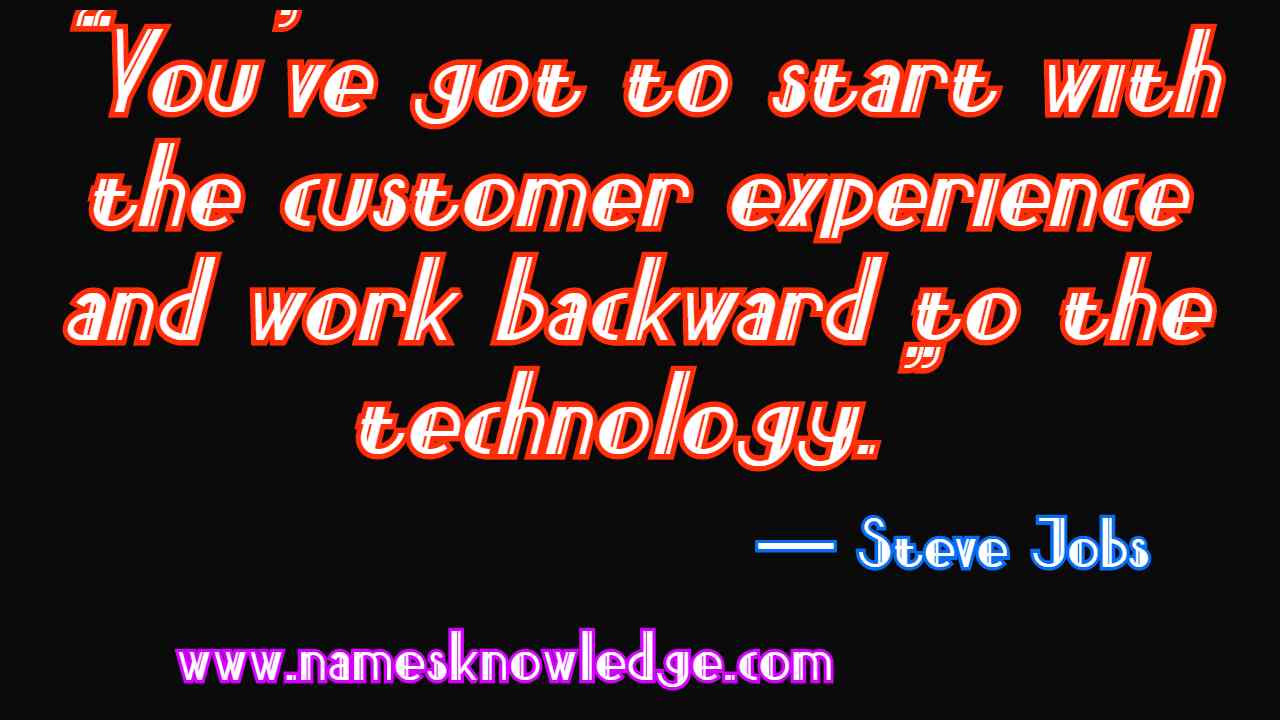 Steve Jobs Quotes has always been inspiring to all of us. In this issue we will discuss about Steve Jobs quotes work.

Steve Jobs quotes work provides us with the motivation to move forward in life.

So lets start. You are most requested that in the following comment, please tell us how you felt about this post. Also tell us which is your favorite Steve Jobs quotes. Also if there is a need for improvement anywhere in this post. Then write a comment in the comment.

1.) “Simple can be harder than complex: You have to work hard to get your thinking clean to make it simple. But it’s worth it in the end because once you get there, you can move mountains.”― Steve Jobs Quotes Work

2.) “If they are working in an environment where excellence is expected, then they will do excellent work without anything but self-motivation. I’m talking about an environment in which excellence is noticed and respected and is in the culture. If you have that, you don’t have to tell people to do excellent work. They understand it from their surroundings.”― Steve Jobs

3.) “I decided to drop out and trust that it would all work out OK.” ― Steve Jobs

4.) “We were really working fourteen-to-eighteen-hour days, seven days a week. For like, two years, three years. That was our life. But we loved it, we were young, and we could do it.” ― Steve Jobs

5.) “Your work is going to fill a large part of your life, and the only way to be truly satisfied is to do what you believe is great work. And the only way to do great work is to love what you do. If you haven’t found it yet, keep looking and don’t settle.” ― Steve Jobs

6.) “I’ve always felt that death is the greatest invention of life. I’m sure that life evolved without death at first and found that without death, life didn’t work very well because it didn’t make room for the young.” ― Steve Jobs

8.) “I don’t think I’ve ever worked so hard on something, but working on Macintosh was the neatest experience of my life. Almost everyone who worked on it will say that. None of us wanted to release it at the end.” ― Steve Jobs

9.) “On his father: He was a machinist by trade and worked very hard and was kind of a genius with his hands. He had a workbench out in his garage where, when I was about five or six, he sectioned off a little piece of it and said “Steve, this is your workbench now.” And he gave me some of his smaller tools and showed me how to use a hammer and saw and how to build things. It really was very good for me. He spent a lot of time with me… teaching me how to build things, how to take things apart, put things back together.” ― Steve Jobs

11.) “If you are willing to work hard and ask lots of questions, you can learn business pretty fast.” ― Steve Jobs

12.) “When I was 12 or 13, I wanted to build something and I needed some parts, so I picked up the phone and called Bill Hewlett – he was listed in the Palo Alto phone book. He answered the phone and he was real nice. He chatted with me for, like, 20 minutes. He didn’t know me at all, but he ended up giving me some parts and he got me a job that summer working at Hewlett-Packard on the line, assembling frequency counters. Assembling may be too strong. I was putting in screws. It didn’t matter; I was in heaven.” ― Steve Jobs

13.) “When you work with somebody that close and you go through experiences like the ones we went through, there’s a bond in life. Whatever hassles you have, there is a bond. And even though he may not be your best friend as time goes on, there’s still something that transcends even friendship, in a way.” ― Steve Jobs

14.) “If you are working on something exciting that you really care about, you don’t have to be pushed. The vision pulls you.” ― Steve Jobs

15.) “Neither of us had any idea that this would go anywhere. Woz is motivated by figuring things out. He concentrated more on the engineering and proceeded to do one of his most brilliant pieces of work, which was the disk drive, another key engineering feat that made the Apple II a possibility. I was trying to build the company, trying to find out what a company was. I don’t think it would have happened without Woz and I don’t think it would have happened without me.” ― Steve Jobs

16.) “What I do all day, is meet with teams of people, and work on ideas, and solve problems, to make new products, to make new marketing programs, whatever it is.” ― Steve Jobs

18.) “Companies, as they grow to become multi-billion-dollar entities, somehow lose their vision. They insert lots of layers of middle management between the people running the company and the people doing the work. They no longer have an inherent feel or a passion about the products.” ― Steve Jobs

20.) “We hire people who want to make the best things in the world. You’d be surprised how hard people work over around here. They work nights and weekends, sometimes not seeing their families for a while. Sometimes people work through Christmas to make sure the tooling is just right at some factory in some corner of the world so our product comes out the best it can be. People care so much, and it shows.” ― Steve Jobs

21.) “All we are is our ideas or people. That’s what keeps us going to work in the morning, to hang around these great bright people. I’ve always thought that recruiting is the heart and soul of what we do.” ― Steve Jobs

24.) “A computer is the most incredible tool we’ve ever seen. It can be a writing tool, a communications center, a super calculator, a planner, a filer and an artistic instrument all in one, just by being given new instructions, or software, to work from. There are no other tools that have the power and versatility of a computer.” ― Steve Jobs

27.) “Look at the way artists work. They’re not typically the most ‘balanced’ people in the world. Now, yes, we have a few workaholics here who are trying to escape other things, of course. But the majority of people out here have made very conscious decisions; they really have.” ― Steve Jobs

28.) “It takes a lot of hard work to make something simple, to truly understand the underlying challenges and come up with elegant solutions.” ― Steve Jobs

29.) “You’ve got to start with the customer experience and work backward to the technology.” ― Steve Jobs

30.) “You’ve got to have an idea, or a problem or a wrong that you want to right that you’re passionate about, otherwise you’re not going to have the perseverance to stick it through. I think that’s half the battle right there.” ― Steve Jobs

31.) “I’ve never been so tired in my life. I’d come home at about ten o’clock at night and flop straight into bed, then haul myself out at six the next morning and take a shower and go to work. My wife deserves all the credit for keeping me at it. She supported me and kept the family together with a husband in absentia.” ― Steve Jobs Sanjay
Owner at Names Knowledge
Hi I am Sanjay. I am a Science Graduate and I Like publishing site on different topics.

Latest posts by Sanjay (see all)