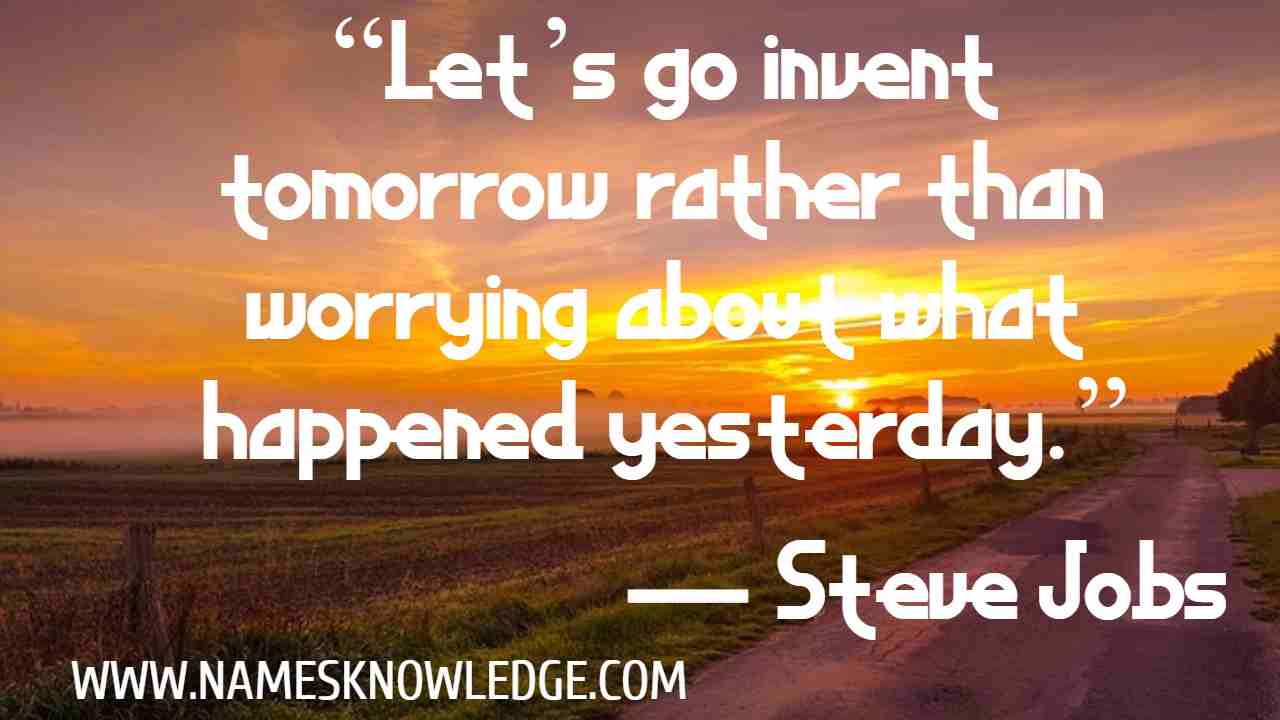 The sentences said by Steve Jobs are very important to us. His quotes give us inspiration in life.

4.) “You have to trust in something, your gut, destiny, life, karma, whatever.” — Steve Jobs

5.) “And most important, have the courage to follow your heart and intuition. They somehow already know what you truly want to become. Everything else is secondary.” — Steve Jobs

6.) “I always advise people – Don’t wait! Do something when you are young, when you have nothing to lose, and keep that in mind.” — Steve Jobs

7.) “Your time is limited, so don’t waste it living someone else’s life. Don’t be trapped by dogma, which is living with the results of other people’s thinking.” — Steve Jobs

8.) “Sometimes life hits you in the head with a brick. Don’t lose faith.” — Steve Jobs

14.) “If you are willing to work hard and ask lots of questions, you can learn business pretty fast.” — Steve Jobs

15.) “Everyone here has the sense that right now is one of those moments when we are influencing the future.” — Steve Jobs

17.) “If you are working on something exciting that you really care about, you don’t have to be pushed. The vision pulls you.” — Steve Jobs Best Quotes

18.) “What I’m best at doing is finding a group of talented people and making things with them.” — Steve Jobs

21.) “I want to see what people are like under pressure.” — Steve Jobs

23.) “I think everybody in this country should learn how to program a computer, should learn a computer language because it teaches you how to think.” — Steve Jobs

24.) “The people that have really made the contributions have been the thinkers and the doers.” — Steve Jobs

25.) “Innovation distinguishes between a leader and a follower.” — Steve Jobs

26.) “Every day you discover something new that is a new problem or a new opportunity to fit these things together a little differently.” — Steve Jobs

Inspirational Steve Jobs Quotes to gets Motivation in Life

27.) “The key thing that comes true is that they had a variety of experiences which they could draw upon, in order to try to solve a problem or to attack a particular dilemma in a kind of unique way.” — Steve Jobs

28.) “Invest time in yourself to have great experiences that are going to enrich you.” — Steve Jobs Quotes for motivation

29.) “The key thing to remember about me is that I’m still a student. I’m still in boot camp. If anyone is reading any of my thoughts, I’d keep that in mind.” — Steve Jobs

30.) “The most important thing is a person. A person who incites and feeds your curiosity; and machines cannot do that in the same way that people can.” — Steve Jobs

31.) “Simple can be harder than complex: You have to work hard to get your thinking clean to make it simple. But it’s worth it in the end because once you get there, you can move mountains.” — Steve Jobs

32.) “Quality is more important than quantity. One home run is much better than two doubles.” — Steve Jobs

33.) “You have to believe that the dots will somehow connect in your future.” — Steve Jobs

34.) “You can build your own things that other people can use. And once you learn that, you’ll never be the same again.” — Steve Jobs

35.) “I don’t care about being right. I care about success and doing the right thing.” — Steve Jobs

36.) “Don’t take it all too seriously. If you want to live your life in a creative way, as an artist, you have to not look back too much. You have to be willing to take whatever you’ve done and whoever you were and throw them away.” — Steve Jobs

37.) “People judge you on your performance, so focus on the outcome. Be a yardstick of quality. Some people aren’t used to an environment where excellence is expected.” — Steve Jobs Quotes Motivation

38.) “Being the richest man in the cemetery doesn’t matter to me… Going to bed at night saying we’ve done something wonderful… that’s what matters to me.” — Steve Jobs

39.) “The only thing you have in your life is time. If you invest that time in yourself to have great experiences that are going to enrich you, then you can’t possibly lose.” — Steve Jobs

41.) “You get your wind back, remember the finish line, and keep going.” — Steve Jobs

43.) “The most precious thing that we all have with us is time.” — Steve Jobs

44.) “Don’t let the noise of other’s opinions drown out your own inner voice.” — Steve Jobs

45.) “All we are is our ideas or people. That’s what keeps us going to work in the morning, to hang around these great bright people. I’ve always thought that recruiting is the heart and soul of what we do.” — Steve Jobs

48.) “Look at the way artists work. They’re not typically the most ‘balanced’ people in the world. Now, yes, we have a few workaholics here who are trying to escape other things, of course. But the majority of people out here have made very conscious decisions; they really have.” — Steve Jobs

49.) “It takes a lot of hard work to make something simple, to truly understand the underlying challenges and come up with elegant solutions.” — Steve Jobs

50.) “Simple can be harder than complex: You have to work hard to get your thinking clean to make it simple. But it’s worth it in the end because once you get there, you can move mountains.” — Steve Jobs

51.) “If they are working in an environment where excellence is expected, then they will do excellent work without anything but self-motivation. I’m talking about an environment in which excellence is noticed and respected and is in the culture. If you have that, you don’t have to tell people to do excellent work. They understand it from their surroundings.” — Steve Jobs

52.) “Your work is going to fill a large part of your life, and the only way to be truly satisfied is to do what you believe is great work. And the only way to do great work is to love what you do. If you haven’t found it yet, keep looking and don’t settle.” — Steve Jobs Quotes on Work

55.) “When you work with somebody that close and you go through experiences like the ones we went through, there’s a bond in life. Whatever hassles you have, there is a bond. And even though he may not be your best friend as time goes on, there’s still something that transcends even friendship, in a way.” — Steve Jobs

56.) “I think it’s brought the world a lot closer together, and will continue to do that. There are downsides to everything; there are unintended consequences to everything. The most corrosive piece of technology that I’ve ever seen is called television – but then, again, television, at its best, is magnificent.” — Steve Jobs Quotes on Technology

57.) “You’ve got to start with the customer experience and work backward to the technology.” — Steve Jobs

58.) “You need a very product-oriented culture, even in a technology company. Lots of companies have tons of great engineers and smart people. But ultimately, there needs to be some gravitational force that pulls it all together. Otherwise, you can get great pieces of technology all floating around the universe. But it doesn’t add up to much.” — Steve Jobs

59.) “I used to think that technology could help education. I’ve probably spearheaded giving away more computer equipment to schools than anybody else on the planet. But I’ve had to come to the inevitable conclusion that the problem is not one that technology can hope to solve. What’s wrong with education cannot be fixed with technology. No amount of technology will make a dent.” — Steve Jobs

60.) “Learning to program teaches you how to think. Computer science is a liberal art.” — Steve Jobs

61.) “I have a very simple life. I have my family and I have Apple and Pixar. And I don’t do much else.” — Steve Jobs Quotes on Life

62.) “We had a fundamental belief that doing it right the first time was going to be easier than having to go back and fix it. And I cannot say strongly enough that the repercussions of that attitude are staggering. I’ve seen them again and again throughout my business life.” — Steve Jobs

63.) “Once you discover one simple fact, and that is everything around you that you call life, was made up by people that were no smarter than you.” — Steve Jobs

64.) “Don’t take it all too seriously. If you want to live your life in a creative way, as an artist, you have to not look back too much. You have to be willing to take whatever you’ve done and whoever you were and throw them away.” — Steve Jobs

65.) “Your time is limited, so don’t waste it living someone else’s life. Don’t be trapped by dogma, which is living with the results of other people’s thinking.” — Steve Jobs

Rumi Quotes on Love and Lovers