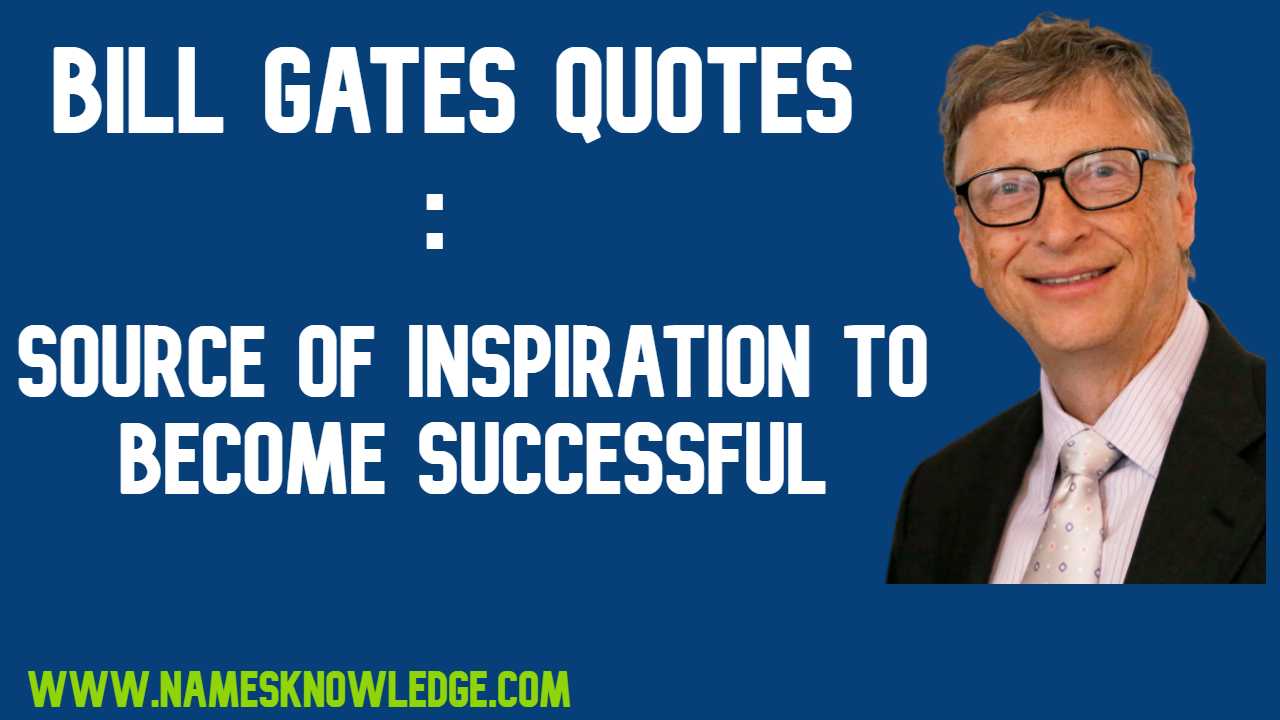 Bill Gates Quotes are great source of Inspiration to become successful in life.

This post contains All the famous and best Bill Gates Quotes on Success, Computers, Leadership, Technology, Education, Life and about Money and Life.

2. “Don’t compare yourself with anyone in this world, if you do so, you are insulting yourself.”― Bill Gates

3. “It’s fine to celebrate success but it is more important to heed the lessons of failure.”― Bill Gates

4. “Patience is a key element of success.” ― Bill Gates

5. “Success is a lousy teacher. It seduces smart people into thinking they can’t lose.” ― Bill Gates

6. “It’s fine to celebrate success, but it is more important to heed the lessons of failure.” ― Bill Gates

8. “To win big, you sometimes have to take big risks.” ― Bill Gates

11. “Your most unhappy customers are your greatest source of learning.” ― Bill Gates

12. “Our success has really been based on partnerships from the very beginning.” ― Bill Gates

13. “If you think your teacher is tough, wait till you get a boss.” ― Bill Gates

14. “Microsoft is not about greed.” It’s about innovation and fairness.” ― Bill Gates

15. “As we look ahead into the next century, leaders will be those who empower others.” ― Bill Gates Famous Quotes

16. “If I’d had some set idea of a finish line, don’t you think I would have crossed it years ago?” ― Bill Gates

17. “Money has no utility to me beyond a certain point.” ― Bill Gates

18. “Innovation is moving at a scarily fast pace.” ― Bill Gates

19. “I failed in some subjects in exam, but my friend passed in all. Now he is an engineer in Microsoft and I am the owner of Microsoft.” ― Bill Gates

20. “I think it’s fair to say that personal computers have become the most empowering tool we’ve ever created.” They’re tools of communication, they’re tools of creativity, and they can be shaped by their user.” ― Bill Gates Quotes on Computers

22. “We are not even close to finishing the basic dream of what the PC can be.” ― Bill Gates

23. “Paper is no longer a big part of my day.” I get 90% of my news online, and when I go to a meeting and want to jot things down, I bring my Tablet PC.” It’s fully synchronized with my office machine, so I have all the files I need.” It also has a note-taking piece of software called OneNote, so all my notes are in digital form.” ― Bill Gates

24. “The PC has improved the world in just about every area you can think of.” Amazing developments in communications, collaboration and efficiencies.” New kinds of entertainment and social media.” Access to information and the ability to give a voice people who would never have been heard.” ― Bill Gates

25. “When the PC was launched, people knew it was important.” ― Bill Gates

26. “DOS is ugly and interferes with users’ experience.” ― Bill Gates

27. “Certainly there’s a phenomenon around open source.” You know free software will be a vibrant area.” There will be a lot of neat things that get done there.” ― Bill Gates Quotes on Software

28. “A lot of people assume that creating software is purely a solitary activity where you sit in an office with the door closed all day and write lots of code.” ― Bill Gates

29. “Software is a great combination between artistry and engineering.” ― Bill Gates

30. “The way to be successful in the software world is to come up with breakthrough software, and so whether it’s Microsoft Office or Windows, its pushing that forward.” New ideas, surprising the marketplace, so good engineering and good business are one in the same.” ― Bill Gates

31. “Software innovation, like almost every other kind of innovation, requires the ability to collaborate and share ideas with other people, and to sit down and talk with customers and get their feedback and understand their needs.” ― Bill Gates

32. “The Internet is becoming the town square for the global village of tomorrow.” ― Bill Gates Quotes on Internet

33. “The future of advertising is the Internet.” ― Bill Gates

34. “You may have heard of Black Friday and Cyber Monday.” There’s another day you might want to know about: Giving Tuesday.” The idea is pretty straightforward.” On the Tuesday after Thanksgiving, shoppers take a break from their gift-buying and donate what they can to charity.” ― Bill Gates

36. “Technology is unlocking the innate compassion we have for our fellow human beings.” ― Bill Gates

37. “The advance of technology is based on making it fit in so that you don’t really even notice it, so it’s part of everyday life.” ― Bill Gates

38. “Technology is just a tool.” In terms of getting the kids working together and motivating them, the teacher is the most important.” ― Bill Gates

39. “Information technology and business are becoming inextricably interwoven.” I don’t think anybody can talk meaningfully about one without the talking about the other.” ― Bill Gates

40. “Success is a lousy teacher.” It seduces smart people into thinking they can’t lose.” ― Bill Gates Quotes on Success

41. “In inner-city, low-income communities of color, there’s such a high correlation in terms of educational quality and success.” ― Bill Gates

42. “Well I think any author or musician is anxious to have legitimate sales of their products, partly so they’re rewarded for their success, partly so they can go on and do new things.” ― Bill Gates

43. “It’s fine to celebrate success but it is more important to heed the lessons of failure. ” ― Bill Gates

45. “It’s fine to celebrate success, but it is more important to heed the lessons of failure.” ― Bill Gates

46. “Our success has really been based on partnerships from the very beginning.” ― Bill Gates

47. “As we look ahead into the next century, leaders will be those who empower others.” ― Bill Gates Quotes on Leadership

48. “Research shows that there is only half as much variation in student achievement between schools as there is among classrooms in the same school.” If you want your child to get the best education possible, it is actually more important to get him assigned to a great teacher than to a great school.” ― Bill Gates Quotes on Education

49. “In inner-city, low-income communities of color, there’s such a high correlation in terms of educational quality and success.” ― Bill Gates

51. “When you revolutionize education, you’re taking the very mechanism of how people be smarter and do new things, and you’re priming the pump for so many incredible things.” ― Bill Gates

52. “In poor countries, we still need better ways to measure the effectiveness of the many government workers providing health services.” They are the crucial link bringing tools such as vaccines and education to the people who need them most.” How well trained are they? Are they showing up to work? ” ― Bill Gates

54. “The advance of technology is based on making it fit in so that you don’t really even notice it, so it’s part of everyday life.” ― Bill Gates

55. “Governments will always play a huge part in solving big problems.” They set public policy and are uniquely able to provide the resources to make sure solutions reach everyone who needs them.” They also fund basic research, which is a crucial component of the innovation that improves life for everyone.” ― Bill Gates

57. “Television is not real life. In real life people actually have to leave the coffee shop and go to jobs.” ― Bill Gates

58. “What’s amazing is, if young people understood how doing well in school makes the rest of their life so much interesting, they would be more motivated.” It’s so far away in time that they can’t appreciate what it means for their whole life.” ― Bill Gates

59. “Intellectual property has the shelf life of a banana.” ― Bill Gates