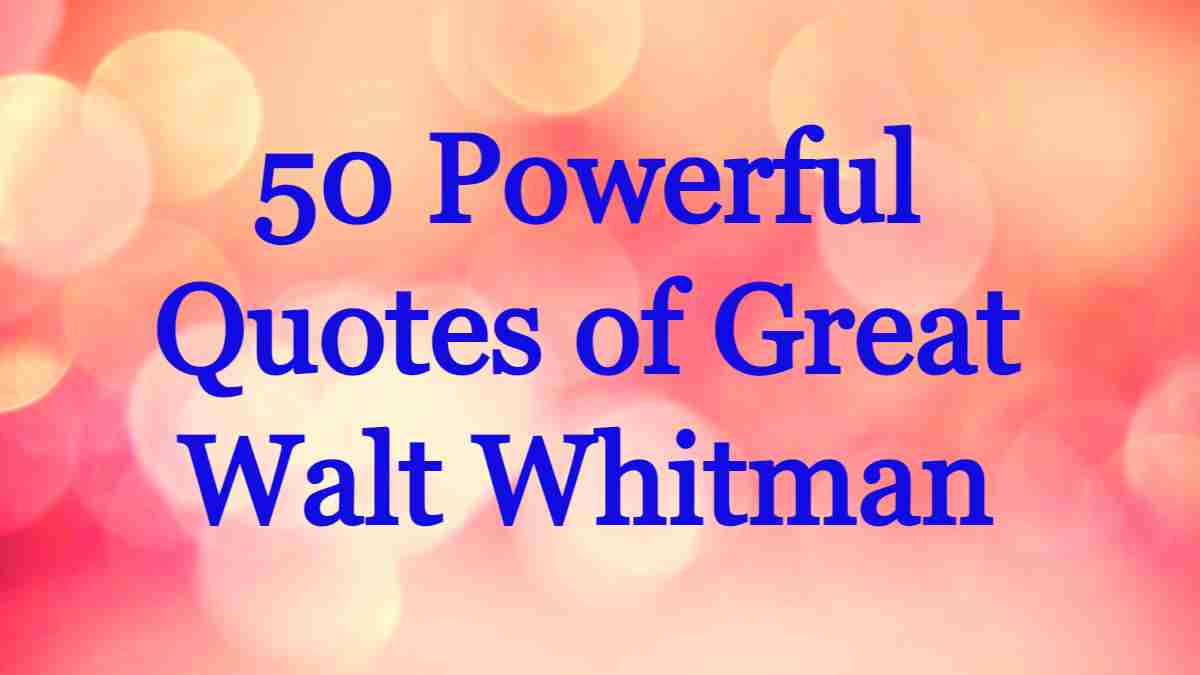 “Whatever satisfies the soul is truth.”

“Be curious, not judgmental.”

“I discover myself on the verge of a usual mistake.”

“Happiness, not in another place but this place…not for another hour, but this hour.”

“Every hour of every day is an unspeakably perfect miracle.”

“Keep your face always toward the sunshine – and shadows will fall behind you.”

“If anything is sacred the human body is sacred.”

“Simplicity is the glory of expression.”

“Do anything, but let it produce joy.”

“There is no God any more divine than yourself.”

“The truth is simple. If it was complicated, everyone would understand it.”

“A blade of grass is the journeywork of the stars”

“To me, every cubic inch of space is a miracle.”

“To have great poets, there must be great audiences.”

“When one reaches out to help another he touches the face of God.”

“I swear to you, there are divine things more beautiful than words can tell.”

“We were together. I forget the rest.”

“I bequeath myself to the dirt to grow from the grass I love, If you want me again look for me under your bootsoles.”

“I keep thinking about you every few minutes all day.”

“What is that you express in your eyes? It seems to me more than all the print I have read in my life.”

“Those who love each other shall become invincible.”

“Love the earth and sun and animals, Despise riches, give alms to everyone that asks, Stand up for the stupid and crazy, Devote your income and labor to others… And your very flesh shall be a great poem.”

“Whoever you are, now I place my hand upon you/ That you may be my poem/ I whisper with my lips close to your ear/ I have loved many women and men, but I love none better than you.”

“The female that loves unrequited sleeps,

And the male that loves unrequited sleeps,

The head of the money-maker that plotted all day sleeps,

And the enraged and treacherous dispositions, all, all sleep.”

“Give me solitude, give me Nature, give me again O Nature your primal sanities!”

“Why who makes much of a miracle? As to me I know nothing else but miracles, whether they be animals feeding in the fields, Or, birds, or the wonderfulness of insects in the air, Or the wonderfulness of the sundown, or of stars shining so quiet and bright, Or the exquisite delicate thin curve of the new moon in spring; These, with the rest, one and all, are to me, miracles.”

“Give me odorous at sunrise a garden of beautiful flowers where I can walk undisturbed.”

“Lo, the most excellent sun so calm and haughty, The violet and purple morn with just-felt breezes, The gentle soft-born measureless light, The miracle spreading bathing all, the fulfill’d noon, The coming eve delicious, the welcome night and the stars, Over my cities shining all, enveloping man and land.”

“After you have exhausted what there is in business, politics, conviviality, and so on – have found that none of these finally satisfy, or permanently wear – what remains? Nature remains.”

“I have learned that to be with those I like is enough.”

“To know the universe itself as a road, as many roads, as roads for traveling souls.”

“In the confusion we stay with each other, happy to be together, speaking without uttering a single word.”

“Let your soul stand cool and composed before a million universes.”

“I see behind each mask that wonder a kindred soul.”

“Re-examine all that you have been told… dismiss that which insults your soul.”

Some more quotes to get inspiration in life

“The future is no more uncertain than the present.”

“The strongest and sweetest songs yet remain to be sung.”

“I hear and behold God in every object, yet understand God not in the least.”

Thanks for visiting this site.

Love Quotes for Him

Swami Vivekananda Quotes for Students to get Motivation